Chamorro Vocabulary for Things Around the House

Kuåtton i Gima’ Siha – Rooms of the House

Kosas i Kuåtto – Things of the Room 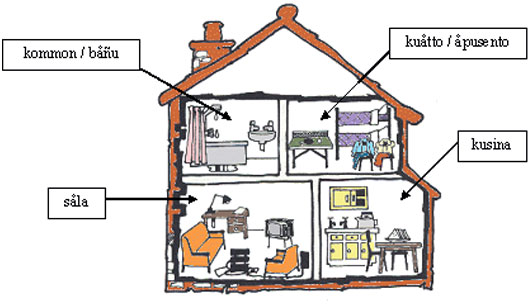 Names of the Rooms in a Chamorro House

The kusinan sanhiyong, or outside kitchen, is a common and significant feature of Chamorro homes. The kusinan sanhiyongis a necessary addition to all Chamorro homes for the reason that the traditional kitchen inside lacks the space required to prepare huge quantities of food. A typical Chamorro household will often be required to prepare food for a fiesta, a lisåyu*, or regular gupot** like birthdays or christenings. Preparing food in large quantities takes a significant amount of labor, and oftentimes this requires the help of many family members.

END_OF_DOCUMENT_TOKEN_TO_BE_REPLACED

UM verbs are a class of verbs that use the Yo’-type pronouns as the Subject pronouns – when the pronoun is the subject of the sentence. They are called UM verbs here because the affix um is used to conjugate these verbs. There are actually two affixes that are used to conjugate UM verbs, the first is UM and the second is MAN. Both will be explained here.

To conjugate with UM, there are two cases you must look for:

1) If the verb begins with a vowel simply prefix the verb with um and you have your first conjugation.

2) If the verb begins with a consonant, you insert um into the first Consonant-Vowel pair in the first syllable.

The forms umo’mak and kumati are the “completed” forms of the verbs.

To conjugate the “continuous” form of the verb, the verb needs to undergo reduplication. Reduplication is when we repeat a syllable in a word.

1) With vowel-initial words, we simply need to reduplicate the vowel, but separating the duplicates with a glottal stop.

2) If the word begins with a consonant, we take the syllable that is the second to the last syllable in the word.

NOTE: If the syllable contains more than just a consonant and vowel pair (like GAN in hugando), you need to duplicate only the first consonant-vowel pair.

When a plural pronouns is used with a verb conjugated with um the pronoun refers to only TWO people.

Bumabaila siha.  They (2) are dancing.

To express the subject refers to three or more people, we use the plural prefix MAN.

END_OF_DOCUMENT_TOKEN_TO_BE_REPLACED

The Chamorro alphabet, or i atfabetu, is composed of 24 letters. The following table lists all the letters with their pronunciations. 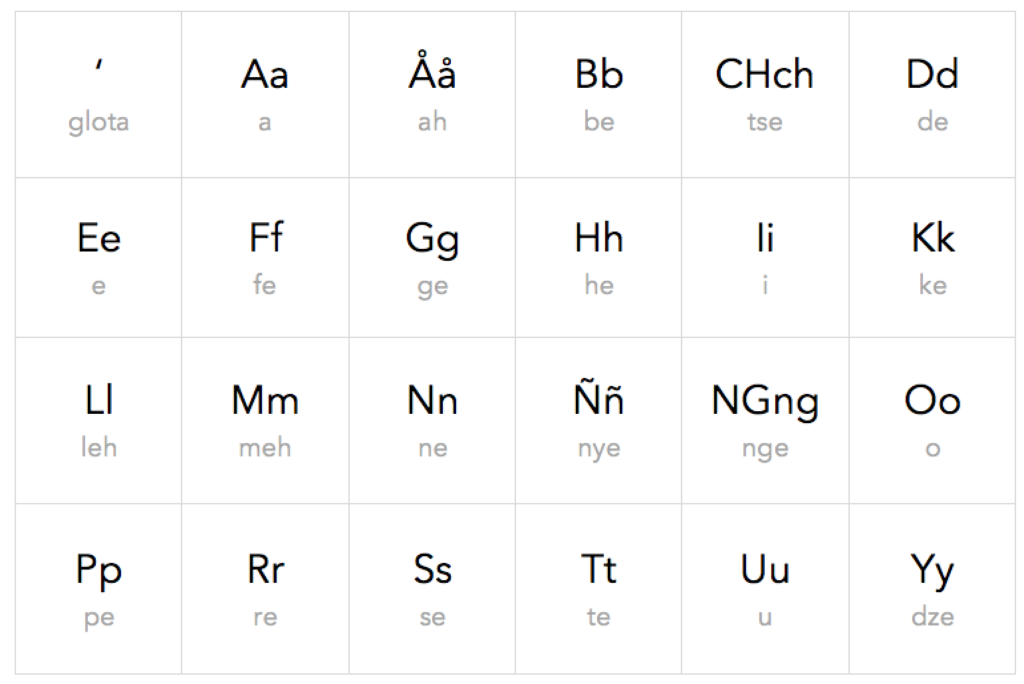 NOTE: Those who grew up before the 1990s may have remembered the alphabet pronounced another way. This new way of pronouncing the alphabet was a shift away from the original pronunciations, which for some letters of the alphabet, was the exact same or close to the pronunciations of the Spanish alphabet. For example, the letters f, h, k, l and m, were pronounced eh-feh, ha-tsee, kah, eh-leh, and eh-meh, respectively.

The Vowels or I Buet

There are six vowels in the Chamorro alphabet.

a – Pronounced like the a in tap or bat.

å – Pronounced like the a in father or papa.

e – Pronounced like the e in bed or test.

o – Pronounced like the o in go, but shorter.

The Consonants or I Konsonante

There are eighteen consonants in the Chamorro alphabet including two semi-consonants: Ch, Ng .

‘ – The glota, or glottal stop, can only be defined as a sudden stop. It’s that sound you hear when you say uh oh. The glota only follows a vowel and the addition not only changes the sound but the word’s meaning. Example: måta – eye, måta’ – raw, uncooked.

b – The letter b in Chamorro is slightly softer than its more aspirated English counterpart.

d – Pronounced like the English d, but less aspirated.

k – Pronounced like the English k, but less aspirated.

l – Pronounced like the English l, but your tongue should be closer to the roof of your mouth (rather than the ridge).

ñ – The letter ñ is pronounced like the ny in  the English word “canyon.” The letter ñ was taken from the Spanish alphabet and easily adopted as many Chamorro words already had this sound (e.g. låña, meaning “oil”; danña’, meaning “to gather”).

ng – The letter ng is pronounced like the sound at the end of the word song. This may not seem so bad at first until you learn that there are Chamorro words that begin with ng. For example, the words nginge’, meaning “to smell,” and ngångas, meaning “to chew,” are pronounced NGEE-ngeeh and NGAH-ngass, respectively.

p – The letter p in Chamorro is slightly softer than its more aspirated English counterpart.

t – Pronounced like the English t, but less aspirated.

y – The letter y in Chamorro can also be considered a semi-consonant, because it is pronounced more like “dz” rather than a “yuh” sound in English.

END_OF_DOCUMENT_TOKEN_TO_BE_REPLACED

The pronoun “we” in English can sometimes be ambiguous if the sentence is not constructed carefully. When it is used in conversation sometimes it is unclear if the person being spoken to is included in this mention of “we.” This ambiguity does not exist in Chamorro as there are two versions of “we”, defined as inclusive, meaning the addressee is included, and exclusive, the addressee is excluded.

The Inclusive/Exclusive “we” in Chamorro

Look at the sentence below and then look at the diagrams.

In Figure 1, the speaker is letting the other person know they’re included in the activity.

Figure 1. The Inclusive WE

Speaker: Para bai in hanao para i tasi! / We’re going to the beach!

In Figure 2, the speaker is letting the other person know his plans.

Figure 2. The Exclusive WE

A “We” for every situation

Once you’ve learned and are able to distinguish between the two “we”s in Chamorro, you can start learning the different words for them. The word for we changes depending on what you want to say.

Chamorro ham.
We are Chamorro.

Chamorro hit.
We are Chamorro.

You may have noticed that the above sentence examples have the subject pronoun AFTER the verb. When a definite (specific) object is involved, the sentence structure changes to a structure familiar to English speakers: Subject Verb Object.

For example, in the sentence “He ate the apple”, the word “he” is the subject, “ate” is the verb, and “the apple” is the object. In Chamorro, the structure will be exactly the same. Except, here’s the catch, this only applies if the object is a definite object, that is, the object is specific. Our example works because the object “the apple” is specific; the apple refers to a specific apple located somewhere or bought by someone. If our example had been “He ate an apple,” then our sentence structure would revert back to Verb Subject, since there is no definite object involved.

The words for we in this sentence construction are inclusive ta and exclusive in.

In English, the way someone emphasizes that the subject is responsible for an action is by adding the words “is the one who” or by putting stress on the subject when mentioning them verbally.

Hami chumule’ i lamasa siha.
We (are the ones who) brought the tables.

Now that you’ve figured out there’s more to “WE” in Chamorro, you’re probably thinking you’re done, right? Well, not so fast. If you haven’t checked it out already, here’s how to say the singular and plural “you” in Chamorro.

END_OF_DOCUMENT_TOKEN_TO_BE_REPLACED

In Chamorro, there are five ways to say you, and they differ according to whether or not you’re addressing a single person or a group and what you’re trying to say. The word you in English is used to refer to one person or a group of people. In Chamorro, you have five different ways to say you and they are grouped below according to how you use them.

Before we go into the different categories, here is a quick example of the two types of you in English:

Unlike English, the word for you in Chamorro is different for the singular and the plural. The word also changes according to the pronoun category,  which are: Emphatic Pronouns, Yo’-Type Pronouns and Hu-Type Pronouns.

These pronouns are called emphatic because they place emphasis on the subject. Sometimes referred to as stressed pronouns, they are often used after prepositions like yan (and/with), para (for) and sin (without).

Hamyo – You (plural) – Para hamyo este! This is for you all!

Maria:      Håyi para u na’gasgas i kusina?
Who is going to clean the kitchen?

Magof hao. You are hapy.

Kao manestudia hao? Did you study?

These pronouns are the subject pronouns in transitive sentences involving specific objects.

Un kanno’ i mansana. You ate the apple.